The Biology of PTSD

March 30, 2020/in Mental Health, Feelings about the week / by Daniel Adamek, Executive Director

Approximately 15% of veterans of recent wars, that is those who served in the Vietnam War, the Gulf War, Iraqi Freedom or Enduring Freedom, suffer or have suffered from Posttraumatic Stress Disorder (PTSD). This observation has brought a lot of attention to the realness of this disorder. It would be easy to take this information and assume that PTSD is uniquely a combat veteran’s issue. The truth is though, an estimated 8% of Americans will suffer from PTSD at some point in their lifetime.

It was in the 1970s when the diagnosis PTSD first gained acceptance. It was the observation that a great many veterans returning from Vietnam were suffering from a condition connected to their combat experiences that demanded that a diagnosis be recognized. It was in 1980 that the condition was included in the Diagnostic and Statistical Manual for Mental Disorders. There’s been a huge amount of observational research on the effects of psychological trauma since that time. That research has certainly shed considerable light on the common behavioral symptoms and prevalence of the disorder, but the specifics of what external factors and personal characteristics result in the disorder, and how it manifests in different individuals remain elusive. The current diagnostic criteria are summarized as follows: 1) Exposure to a life-threatening event, serious injury or sexual violence. 2) Recurring memories or flashbacks. 3) Avoidance of trauma reminders. 4) Changes in mood or cognition. 5) Attention problems, easily startled or violent outbursts.

Most people don’t develop PTSD following a life-threatening or otherwise violent traumatic event. For the general population, the statistical probability of developing PTSD following trauma exposure is consistent with those figures above related to combat exposure, somewhere between 10-20%. That is a wide range, and its uncertainty reflects our limited understanding of the condition, but it clearly illustrates that PTSD is not the normative response.

So who are those, let’s just say 15%, and what makes them susceptible? How much, if any, does one’s genetic makeup influence their susceptibility? What roles do environment and experience play? Of course, these are standard questions we want to answer in order to understand any non-normative behavior, be it a disorder or anextraordinary capability such as elite athleticism or intellectual or artistic genius. In any case, the answers lie in the physiological mechanisms that drive all the behaviors that define our individuality. 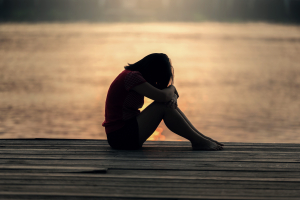 The identification of the brain as the engine of the mind is a relatively recent discovery. The earliest cited evidence that the brain is responsible for the way we think and behave comes from the case of Phineous Gage. In 1848 Gage survived a railroad construction accident where an iron rod pierced his head resulting in the destruction of the entirety of the left frontal lobe of his brain. He exhibited significant changes in personality following his recovery from this accident. It was this observation that established that a critical function of the brain is to manage the way we think and feel.

We now take it as common sense that physical trauma to the brain can have negative impacts to cognition, and we’ve come to accept that psychological trauma can also negatively impact cognition.

So it might follow that psychological trauma can also be associated with changes in the brain. And indeed researchers, using modern tools of science and medicine, have revealed that there are many chemical and structural differences in the brains of those suffering from PTSD.

It would be easy to jump to the conclusion that the brain is the sole anatomical piece whose workings we need to understand in order to elucidate the mechanisms of PTSD. However, while the brain (the nervous system) is unambiguously the engine of the mind, it is also necessarily working in conjunction with effectively all the other systems in the body, e.g., the cardiovascular, immune and endocrine (hormone producing) systems. The communication between the brain and all the other systems that comprise us is bidirectional;  That is, the brain may regulate certain changes in the body but it is also a certainty that changes in the body can result in changes in the brain.

In the case of PTSD, the interdependence between the brain and the other body systems is strongly hinted at by the high rates of comorbidity (the concurrence of other disorders), including cardiovascular, gastrointestinal and immune disorders. For example, Iraq and Afghanistan war veterans with PTSD show an increased risk for autoimmune disorders.  More relatably, the simple fact that we universally recognize that certain psychological stimuli cause a “visceral” response underscores the full-body nature of the mind.

With these observations it doesn’t require a great leap of imagination to recognize that the mind and body are inextricably linked, but a scientific understanding of what these linkages are, and how they work, is still in front of us. How far out in front of us will depend on how we as a community prioritize mental health, and the resources we are willing to allocate to advance the science and medicine of the mind.

A Mental Health Diagnosis is Not Personal