Recounting the days and events that led to his son’s suicide, Daniel Adamek sat down with AL.com’s Crystal Bonvillian on the one-year anniversary of the day his son Christian hanged himself in the family’s garage. 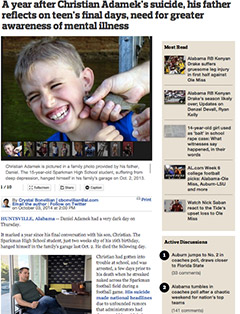 Bonvillian’s resulting article details the difficulties, turmoil and frustration faced by Adamek as he sought help for his son. Sharing the story of his son’s final days, Adamek speaks about the “many points of failure in Christian’s story, from my own denial and fear that clouded my ability to help my son to the failures of the professionals who we expect to be there.”

The origins of Little Orange Fish

From the failures Adamek experienced came Little Orange Fish and its mission to grow and strengthen the mental health community. Little Orange Fish is named after a story written by Christian in a hospital the month before he died. In the story, a little orange fish faces fear and darkenss before sacrificing himself for the welfare of his fellow fish. Adamek first discovered the story when going through his son’s belongings after his death.

A cry for help that no one heard, the story of the little orange fish is the foundation of our mission  – to work toward a mental health system that ensures assistance to anyone seeking support.